I generally prefer to explore a museum without a guide, giving myself space to feel a place and explore its content. But this year I’ve experienced tours by guides who dramatically shaped how I feel and understand particular places.

These guides and their personalities or personal experiences connected with and captivated me. They became imbued in my experience of place, plaiting their contemporary lives into historic spaces. It’s a big ask to expect this kind of synergy between guides and their spaces. But when it happens, it’s museum magic.

My tour of the Guaysamin House Museum was by two teenage girls, one of whom confessed to “just hang out at the museum.” The museum had been the home of Ecuadorian artist, Oswaldo Guayasamin, and all the guides are young locals.

Only my partner and I were on our tour. One of the girls corrected the others English, and I made sure they taught me how to pronounce ‘Guayasamin’. The girls beamed when I got it right. I explained the artists of some works in Guayasamin’s house, and the girls whipped open wardrobe cupboards, pointing out the paint stains still on the artist’s clothes and explained how many wives he’d had. They refused to talk about a display case full of erotic statues and stiffened when ‘the boss’ appeared. They clearly loved the artist and his work, excited by a painting which took only 40 minutes to complete and carefully pointed out the seams sewn by Guayasamin’s mother in potato sacks used by the artist as canvas for his early works.

It didn’t matter the girls weren’t qualified Guayasamin specialists and couldn’t answer all my questions. I was exhilarated by their enthusiasm for the subject and the museum space. I felt the streets of Quito had walked into the house and were breathing the artist’s spirit back to life. When I was led out a final door and quickly farewelled, I was left speechless, at both the quality of the collection in Guayasamin’s house and the two guides whose names I never asked.

By the time I visited the ruins of Xanthos, I was struggling to see the ancient city as anything other than rubble. I’d seen many archaeological sites by this point. But a local man appeared, who implied he’d worked on the site for many years. Without a shared language between us, he showed me wonders I’d otherwise have missed.

He showed me the extensive mosaics lying under the cloth I’d been obliviously walking across, and the old Roman road which led up to and through the city. He insisted I climb the walls to discover long lines of recently unearthed Roman piping, in wonderful condition.

He took some time convincing me to tap a fist-sized rock against an amphitheatre stone, making me jump with surprise when it rang out like a gong. He clapped his hands and laughed at my surprise, his delight echoing around the amphitheatre. He had secrets to show and tell, and he felt real pleasure when the penny dropped for unsuspecting tourists.

Eventually, the man simply shook my hand, said thank you and wandered away, looking for the next suspicious tourist to coax into discovery. I was left awestruck by my ‘guide’ and fascinated by the site.

I went for Mostar’s symbolic and ancient bridge, built during the 1500s, destroyed during the Croat-Bosniac War, then rebuilt and opened in 2004. But Zika’s walking tour revealed the whole city to be a living war museum and my guide was part of the collection. He fought during the war and carries the scars. Zika is marked by the Yugoslav Wars as much as the city of Mostar. 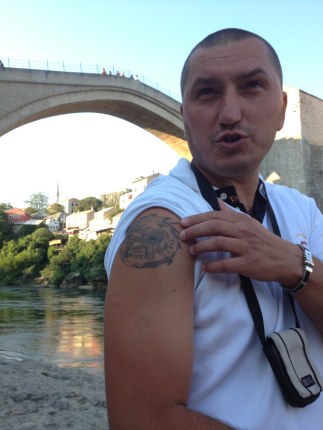 We started at the bridge, where Zika used to be a ‘jumper’, an exclusive 500-year-old club of men (with tattoos) who jump spectacularly off the bridge and perform small civic duties.

He showed us the mall where the Mostar siege began, ignited by two young man forced off the roof by Serbian forces as a public demonstration.

He led us through the bank building used as a sniper tower and from where he had been shot. It felt like the war ended yesterday when stepping over the carpet of broken glass and squeezing into sniper holes still flooded with bullet casings.

After the group tried to understand the many conflicting forces in Mostar during the war, Zika shrugged and said, “everyone comes here and says the war is so confusing. But I think it’s simple. It’s my life.”

I’ve previously emphasised the importance of the local in museums, but here I’m extrapolating from the everyday object to the local personality. The significance of the local and ordinary is not restricted to specialists born of familiarity, like Zika of Mostar. The girls at Guayasamin’s house weren’t specialists, yet I still came away deeply impacted by their tour. It’s about connecting the past with today through a local life. When the ordinary life is a vehicle to the extraordinary. To take Adam Bencard’s comment on my earlier post out of context, drawing on Thomas Dunn’s The Politics of the Ordinary, “they can use their ordinary force to connect to a felt sense of humanity, of the potency of everyday, ordinary life that we all partake in, no matter what bit of ‘local’ we are part of.”

These guides have real power in connecting a visitor to a museum space and in turn, to a broader context, moving beyond the walls to the city, region or localised culture, inviting context in and looking out at it. Diana Lempel, on her blog Cultivating Places, has written about the concept of the entropic city, as a profound and uncontrollable force in creating dynamic places. Can strong personalities and personal experience be an entropic force and dynamic way to experience museums and connect them to their place, their context? How many museum tours do you know which start in the museum and move out into the surrounding city (or vice versa)? Do you welcome having your museum experience shaped by another personality?