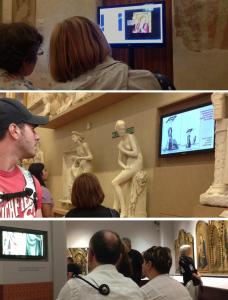 I’m still processing all the museums I visited in Florence. One thing that stood out was the popularity of in-gallery videos, explaining how a type of work was created or conserved.

These included (from the top) how Cimabue’s Crucifix was conserved after being caught in the wave of mud brought into the Basilica di Santa Croce by the 1966 flood, how the multitude of plaster casts in the 19th Century Room at the Gallerie dell’Accademia were used to create bronze sculptures, and how 14th century gold-leaf egg-tempera panels were made.

All these works are extroardinary and hard to fathom from a 21st century perspective. So at every screen, a knot of visitors stayed for extended periods to see step-by-step demonstrations by conservators, and before and after shots.  As the videos continued, some circled around to see the works in a new light. Afterwards, we all looked more slowly, noticing details we hadn’t before, at a closer range. We’d had our looking transformed.